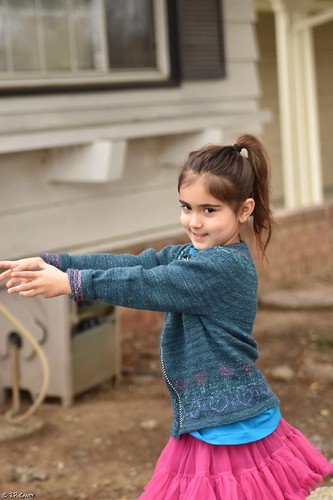 Last year, Erin.Lane Bags and Holiday Yarns took you through the wardrobe. In 2017, we're setting off on another adventure.
Join us as we tour through the enchanted and beautiful lands of Middle-Earth. From the serene lands of the Shire, to the peaceful retreat of Imladris, and down to the shining city of the city of Minas Tirith and the dark lands of Mordor, this knitting journey is not to be missed.
Six boxes will come to you throughout the year, complete with a project bag, a new project pattern, and all the yarn you need to make it come to life. Sign up today for your Middle-Earth knitting tour at erinlanebags.com.

On the Needles:(0:33)
Gigi has been working on Opus the Octopus from Infinite Twist. The body is done, she needs to do eyelids, and she cast on the underside out of contrast yarn. Also, we love the Monterey Bay Aquarium.  We also talk about the Goodreader app.

Jasmin is working on her next Hamilknit. She has made an "And Peggy" chart for the new hat. We mention Emily might be releasing the modified charts, and the TinCanKnits Hackalong.

Gigi is working on socks out of White Birch Fiberarts, and she is planning to knit them into smooth operator socks.

Jasmin is also working on a skein of White Birch in the Little Birdie colorway. $5  of the sale of each skein of this color will be donated to the ACLU, and $5 will go to Planned Parenthood.

Gigi is working on the cuff of a pair of green Christmas socks from #25DaysOfEnabling  It needs something more, so she has stopped working on it.  Episode 18 of the "The Fruity Knitting Videocast" has an excellent fair isle tutorial about 20 minutes in. We mention the Philosopher's Wool technique technique.


Jasmin is working on black sleeves for the Anna Cardigan.

Gigi is working on the Puerto Montt, But still hasn't knitted up all the yarn that she had ripped out.
She mentions his Welcome to the Flock cardigan.

Jasmin loves the yarn she got from Lisa Souza and she is plannning to knit a Diplodocus sweater for Rex and she mentions Megknitficent who knits amazing things.

Jasmin mentions Sherlock Knits, by Joanna Johnson. She is planning to knit Rex a Sherlock hat out of cascade 220. She mentions the Olivia hat, and she started a Cat hat.

Jasmin is about ⅓ done with the sleeves on the Anna cardigan. Jasmin started and is nearly finished with a  Cat hat for the Women's March on January 21st.

Jasmin is also working on her Bifrost scarf.

Gigi is wearing wool socks, and hat at night and the Knitmore cowl and a cowl out of handspun.  She is thinking she should knit some sweaters she wants to wear. The kids like it when Jasmin wears the Breezy cardigan

We will be attending TNNA in January and Stitches West,  February 23-26.

#OperationSockDrawer and #Project SweaterChest are  put on hold for the time being.

Today, we have a piece of advice:
If at first you don't succeed, find new directions.
Jasmin mentions King Arthur Flour recipes.

Jasmin did Hamilknit star crown repair. She used the Wanda ("handitool") to do the repairs.

This week we review My Favorite Things: a knitted celebration of The Sound of Music by Anne Vally

(You can find the kit/collection here.)

Jasmin has an amazing LYS experience at the Cake Works. Also, Genevieve watched The Grinch cartoon. She said that natural food color is available at Whole Foods and is called India Dye.

Gigi is fond of the Die Hard! series of Christmas movies. Also, the California Raisins.
Gigi had sewn small Christmas stockings, stuffed them  with small ornaments from Beverly's and hung them from a garland. Gigi is hanging her mini balls from the Opal advent calendar between the Christmas stockings.
Posted by Gigidahling at 6:50 PM