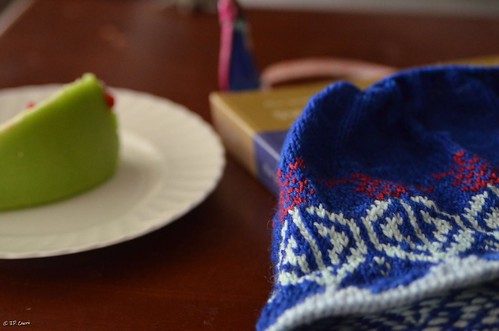 
This episode has been sponsored by

Erin.Lane Bags is teaming up with a new group of indie dyers to bring you the 2017 Indie Yarn Carnival. Receive a brand new box six time throughout the year, stuffed full with a brand new knitting project, including an exclusive Erin.Lane project bag, an exclusive colorway, and a great pattern that is perfect for the Knit-a-longs that accompany every new box.
This year's dyers include: Destination Yarns, Twisted Owl Fiber Studio, Miss Babs, Safronie, and Gynx Yarns. You won't want to miss out on this colorful and exciting club collection. Visit erinlanebags.com today to sign up for your spot in the 2017 Indie Yarn Carnival.

Gigi was working on the January Skies,#BigBadBergalong, out of Black Trillium Fibres. and she was worried about  running out of yarn. It is now a finished object.

Jasmin has made  good progress on her Hamilknit hat. Jasmin has Startosis. She is so pleased with her Highlighter tape, and we mention the  GoodReader App.

Gigi has finished a pair of socks out of Berry Colorful Yarnings and she wants to participate in Voolenvine's Box o'Sox Knitalong.

Jasmin worked on the R&R Hoodie for Genevieve out of KnittedWit Love is Love. She also cast on the sleeves for the Anna cardigan.

Gigi worked some more on her #Behmalong Puerto Montt and has gotten to where she has to weigh her remaining yarn. Jasmin offers the use of her small scale.

Jasmin wants to finish Genevieve's Anna cardigan. and is working on the sleeves. She thinks she should get an Ott lite and Gigi suggests getting one with a magnifying glass.
Also Jasmin complains about the i-cord knitting gadget.


Gigi is working on a preemie hat out of Twelve Days of Christmas, from Berry Colorful Yarnings

Gigi is wearing wool socks, and hat at night and the Knitmore cowl, and a cowl out of handspun.
The Knitmore cowl is out of the Knitmore colorway from Abstract Fiber.  Gigi shares what she remembers from knitting the cowl.  Jasmin is planning to knit this cowl, and mom-proof it.

Jasmin wore her BostonJen (the Greyhaven Hat), hat the Eadon, and the Rainbow Dots cowl, Genevieve wore her  Elsa sweater, Squirrel sweater, Elmo scarf, and “Worm Hat”, duck sweater. Rex wore his Welcome to the Flock, and his Landon cardigan and Genevieve's Bumble Hat with the giant pompom. Andrew wore his cashmere hat.

We will be attending TNNA in January and Stitches West, February 23-26. We mention the Yarninacs and Backstage Knitting.

The Grinch-Along has started December 1st, and this is an instagram #grinchalong
and ravelry thread contest. For this contest, work on anything that brings you joy and is not 2016 holiday gift knitting. We have amazing prizes, and bags made by us from this pinterest tutorial.

This is the grinch fabric.

The  Do Some Good contest has started on Friday after Thanksgiving.
The object of Do Some Good is to do something positive on a local, national or global level. Something that benefits more than your immediate family and friends. This year we will try and focus on supporting social justice organizations.
Amazing prizes TBA.

This week we have a bit of advice: Read the manual. Try something new that scares you.
And Jasmin's theme for 2017 is "Speak Up!"

Holidays with the Knitmores:(54:14)
If you give a Mouse a Christmas cookie  (This is a Christmas cartoon that we really enjoyed .)

We also love all the other mouse books in the series. Jasmin and Genevieve worked on a felt advent calendar.

We scored the last bit of the Grinch fabric at our local Joanne's ! (We are planning to sew it into this years Grinch-Along bags.)
Posted by Gigidahling at 6:27 PM