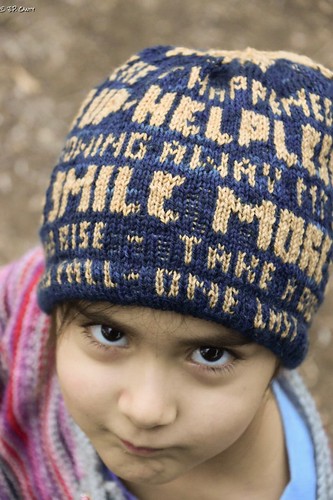 
This episode has been sponsored by:

Feeling the holiday rush?  Need a quick gift, or some yarn that knits up in a flash?  Check out the Need It Now section at AbstractFiber.com. Everything is in stock and ready to ship. New items are added every day. Happy Holidays from Abstract Fiber!

Jasmin has finished Genevieve's Hamilknit hat. She loves the design, out of Lisa Souza Dyeworks, she also has cast on one hat for herself. And she is adding a bit of design.  She used the Philosopher's Technique.

Chris Jackson (Washington on Hamilton) did a duet with Elmo.

Gigi finished the Starry Night out of Opal Vanilla socks, and she is working on the heels of a pair of Vanilla socks. She is planning to participate in Voolenvine's Box o'sox KAL.

Jasmin is thrilled with the responses she got to her issue of knitting with black yarn. She also has made a little progress on the sleeves for the Anna cardigan.

Rex is not particular about his knitwear at this time. Maybe she will knit him a Ribbi Cardi
She is very fond of the Design from Kate Oates, and the Diplodocus is on sale until sunday, And her Christmas sweaters are brilliant and you can make them longer, Boston Jen is churning out Christmas gifts by the bunch.

Gigi is working on the  Puerto Montt

Jasmin is working on the end of the Bifrost. Tincanknits has a Hackalong, where participants are encouraged to do changes on their patterns. Also, the Simple Collection by Tincanknits is available at no charge. Jasmin was enabled into yarn from StevenBe  in  Frozen colorways.  So Jasmin is planning to knit this yarn into a Wonderful Wallaby, or maybe a Flax Light with a pouch.

Gigi wore wool socks, and hat by Khalila at night and the Knitmore cowl, and a cowl out of her handspun out of some mystery batt. Jasmin mention Fiberconditioner from WHOM?

Jasmin wore her BostonJen Greyhaven hat & cowl, Eadon, Tangled Yoke sweater, and Breezy Cardigan and the Mondo Cable cardigan. Genevieve wore her Elsa sweater, Elso hat and gloves, the Squirrel sweater, Elmo scarf, and “Worm Hat”, Hamilknit hat, Duck sweater. Rex wore his Welcome to the Flock, and his Landon cardigan, and the Knit Baby shirt.DONT RECOGNIZE THIS  and the Sock Yarn sweater by Hannah Fettig, and the Feather and fan blanket.

We will be attending TNNA  at the San Jose Convention Centerin January,  and Stitches West,  February 23-26)

Entries will be judged on originality and general delightfulness. And obviously, Grinchiness.

This week we answer a question out of the "What do you want to hear about?" thread on the Knitmore Girls forum about not twisting large number of stitches on the cast on
Jasmin mentions Project Peace.

Gigi had an issue with a decrease on her Puerto Montt, and was seriously bothered by it. She ripped out the mistake and now is much happier.

Jasmin made a mistake working on the Hamilknit star. She mentions Lombard Street.
Gigi misplaced one of her DPN's that she uses for knitting preemie hats, so she can't work on one.

Jasmin baked butter cookies out of Baking Illustrated, and used the Ugly Sweater kit from Crafty Cooking kits. (Also, if you're local, Cakeworks.)
Jasmin mentions Dory Greenspan's blog. They visited Fantasy of Lights at Vasona Park. She talked about visiting the Grinch.