Off The Menu - Episode 323 - The Knitmore Girls 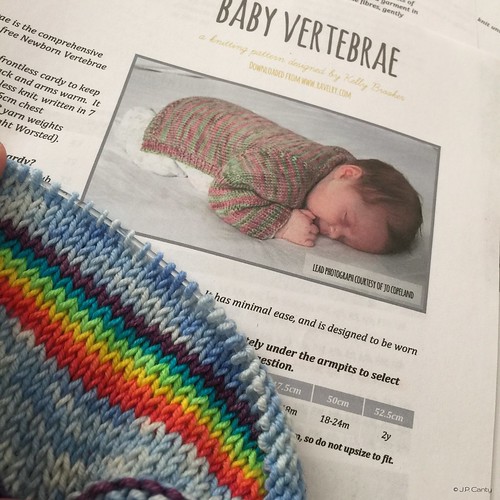 Have you heard of the mother of all subscription boxes, the Bar-Maids House Special?  A quarterly subscription box, each with a unique theme. The first, was Outlander and if you didn't claim yours, you missed out. It completely sold out! But now is your window of opportunity to snag the second quarter limited edition, Knitmore Girls themed box. The Knitmore Girls House Special not only rewards you with a subscription to happiness, it also admits you to an exclusive club of Bar-Maids fanatics who will receive things chosen by Gigi and Jasmin.  Unreleased to the public, you just might have to keep it under lock and key! The window to reserve your box closes April 3rd. Don't wait, order now as quantities are limited which means when it's gone, it's gone.

Every hobby needs organization, every project needs a place.  Erin.Lane bags helps you turn your fiber pasttime into neat and organized endeavor.  Our project bags, totes, and needle and notions organizers are everything you need to keep your fiber arts from fraying. 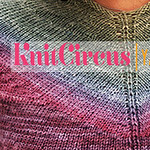 Knitcircus Yarns is pleased as punch to present the Gradient Yoke Sweater Pattern, designed by Amy Detjen. This sweater gives you an exciting and unusual construction; a top-down v-neck raglan. Designed to make the most of a self-striping handpaint, the yoke uses just one skein of gradient yarn, surrounded by coordinating kettle dyes for the body and sleeves. Let our yarn do the color changes for you!

Jasmin started a Baby Vertebrae, and is blaming C.C. from the Geeky Girls for the inspiration, because it also comes in an adult size.  Jasmin bought the rainbow and sky colored yarn  in the colorway "Nothing says Screw You like Rainbows in a Cloudy Sky" . Jasmin calls it "Nothing says 'I love you' like a rainbow", from White Birch Fiber Arts who shared a booth with Canon Hand Dyes.

Jasmin is thinking of knitting a Mama Vertebrae for herself, and also contemplated knitting a Baby Surprise Jacket.

Also Genevieve requested buttons to be re-sewn onto her Very Hungry Caterpillar cardigan, and the sleeves need to be lengthened, too.

Gigi  is swatching for the Viajante in Kilimanjaro yarn from Miss Babs, in the Drift in a Dream colorway.


Jasmin has swatched for matching Kapuzin sweaters,  out of Lisa Souza yarn in color that works for Genevieve and Beanzilla as well. So she bought yarn in her Hardtwist, in the St Louis Blues colorway.

Gigi wonders about the Cassidy and Jasmin mentions a hood down hoodie from Cocoknits.

Gigi picked up the Mini Waters Edge up again, and is working on the edging.

Jasmin is blocking the Barberry cardigan with Handworks Dressing wires.

Gigi has been knitting preemie hats, and knitted one using the Laxo hat pattern from Knockout Knits:

We are doing a new thing:
#expertEnabler.

We haven't shipped any prizes lately, we will do that when Jasmin is not feeling poorly anymore.

Gigi has been wearing her Katarina, and her Carli. She enthuses about scratchy yarn with serious tooth and body to it.

Jasmin wore mostly shawls, her Boneyard out of Abstract Fiber, in the Urban Sunrise colorway, her Ophidian, her Knitmore Citron, her Ribby Cardi, and a Lady Eleanor.

Gigi wore her Cassidy, the Lady Eleanor shawl, an Ophidian shawl, and her Brickless.

Genevieve wore her Squirrel Sweater, and her Antler cardigan.

Participants: post a picture to the ravelry forum, or to instagram with the #operationsockdrawer, have your ravelry name on your instagram profile. Feel free to double dip your projects.

We are co-hosting the Countdown to Outlander Knitalong on instagram,  #countdowntooutlander, #kiltmenowKAL. This has to be creatively related to the Outlander series.  Getting help from pocket Jamie is encouraged.
This is an instagram contest, so please make sure to use the appropriate hashtags.

Prizes for this contest are two braids of fiber and two skeins of yarn from Gourmet Stash in the colorways "Time Traveler" and "Waterweed".

This week we answer a question about patterns from pre-podcasting days. We mention the Einstein   Jacket out of  The Knitting Experience Book 1: The Knit Stitch,

Jasmin knitted a lot of The Amazing Neckdown Raglan (which is actually called "The Incredible, Custom Fit Raglan Sweater").  Jasmin laments that the Ann Norling Fruit hats are not available through Ravelry. Jasmin knitted a number of baby sweaters from Quick Baby Knits, by Debbi Bliss

, and Gigi's Vanilla socks started out from a Cottage Creations pattern. Jasmin talks about a Jo Sharp

Gigi was attacked by a project from Area 51. She pulled a fair isle sock from the The Little Box of Socks

back to the heel, because she couldn't figure out where in the pattern she was
She had also managed to knit a pair of the Dianthus Superbus socks from the The Knitters Curiosity Cabinet Volume I with different size needles, and so cast on another pair with 80 stitches, which is much too large. She cast on again out of a lovely Steven Be yarn, but the yarn didn't want to be socks.

Jasmin was looking for yarn to knit for Genevieve and Beanzilla in the Lisa Souza Booth. She mentions the Gramps sweater by Kate Oats,  that Alana Dakos just had finished. She also mentions the Kangaroo hoodie (actually called the "Wonderful Wallaby". The Kapuzin sweater is the one she will make for both kids.

Gigi had been working on the Trouvaille out of handspun yarn, but didn't care for the way the yarn felt while she was knitting. Jasmin suggested fulling the yarn to allow it to bloom, so Gigi frogged the shawl to reknit it after fulling.

We mention wool waulking in Outlander.
Gigi mentions an Episode of The Worst Jobs in History .

This week we review
Knitting Architecture

Gigi has been spinning regularly on her wheel and  Lark spindles.

Gigi has been sewing the Monkey night shirt, Butterick Patterns B4910 . Threading the bobbin correctly fixed the unbalanced thread .
Posted by Gigidahling at 12:21 PM