Picture This - Episode 36 - The Knitmore Girls 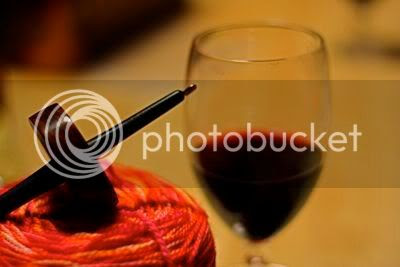 (Photo courtesy of Tika and her low-light lens.)

This week's episode has been sponsored by:

Gigi has finished the second bright blue Regia Saturn sock, she's turned the heel on her first Franklin's Panopticon sock. She is working on a vanilla red and black (Regia) sock. Gigi has also started the Scandanavian sock (out of the Little Box of Socks) in a tan/cream Regia with black Regia as the contrast color. (Tika is using the same MC Regia to make Relatively Normal socks.)

We also discuss our preemie hat knit-a-long. A pattern from Chloe Sparkle is pending.

Jasmin continues to work on her Santa Fe Wrap, which is about 3/4 done. Jasmin has finished the first Bird of Paradise (color) sock in Lisa Souza's Sock! while playing a board game with Tika, ManCandy, and Andrew.

Gigi is working on some socks out of Jasmin's Brown Eyed Girl handspun. Gigi will be doing a Lucy Neatby garter stitch short row heel on this toe-up sock. Tika suggests using a kitchen scale
to weigh yarn.

Gigi has tripped a little on her resolution to weave in her ends. Gigi has gotten a birthday gift - a cone of Artfibers Kyoto in color #20 (Gigi's perfect red). (Jasmin meant for it to me a cone of Tsuki, but got a little distracted in the process.) Gigi is looking for ideas on what to knit with her birthday Kyoto.

Countingsheep on Ravelry is doing a "Wrap Alison in Comfort" blanket. If you're interested in participating, please do so before January 31st.

Jasmin got a new camera! We talk about photography and knitting. Some of our knitting photography idols include Jared Flood and Franklin Habit. Check out Flickr.com for ideas on how to punch up your knitting pictures (search "knitting" in the "search" box). You can sort by "relevant" or "interesting".

Gigi has been working on the Knitting Pure and Simple Neckdown Wrap Cardigan. Gigi isn't a fan of the i-cord finish, so she is going to use a silk ribbon for the closure.

We talk about planning for Stitches West, specifically making a wish list.

Start by going through your stash. Evaluate what you have, what you want, what you don't want, and the colors that your stash is flush with. (Knitter's Review had a great article about "slow stashing".) It's also a good time to organize your Ravlery queue. Last year, Jasmin's list included Colrain lace (from Webs), fiber from Lisa Souza Dyeworks, and glass needles from Michael and Sheila Ernst.

Jasmin talks about the peril of putting down yarn you might want around rabid knitters at Stitches. Jasmin recommends buying handpainted yarns in person
Events:

Meet and greet with the Knitmore Girls at Stitches West in the Purlescence booth from 2-4pm, Saturday, February 28, 2009.

Do you look through knitting magazines and wish that the finished pattern size was larger (or smaller), or that one had a different neckline, or was shorter, that you could use a different yarn? If you attend this workshop all those problems will disappear. Sharon will help you through the process of overcoming those things that have always prevented you from knitting the patterns you love. You will look at shape that suits you and come up with a standard measurement guide especially for you. You'll learn the use of gauge and stitches, shaping and necklines that will make that perfect sweater for you. This is a rare opportunity to learn from a knitting legend.
The shop will remain open until 5 pm on January 25 for meet and greet and book signing with Sharon. Call Purlescence at (408) 735-9276 to register.