This Cat Makes Us Purr - Episode 21 - The Knitmore Girls 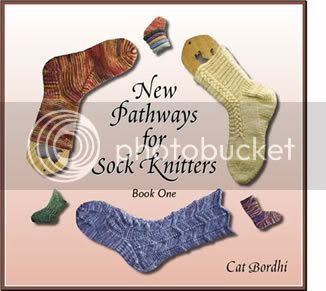 In favor of our chat with Cat Bordhi, we will be omitting our regular segments this week.

New Pathways for Sock Knitters, Book One (Book Two is in progress!). We promise these socks are simpler than they seem!

Lucy Neatby's DVDs- not to be missed!

Lucy Neatby's Cool Socks for Warm Feet, and the Little Box of Socks.

Cat's novel - written in media res, like a moebius.

Some of the original sock books:

Gigi got some Kramer Yarns Sterling, Jasmin got some Kauni.

Join our contest - Cat wants knitting jokes! Submit your jokes to us at knitmoregirls@yahoo.com. Prizes include signed copies of A Treasury of Magical Knitting and New Pathways for Sock Knitters, Book One .
Posted by Jasmin at 6:53 PM 1 comment:

This Cat makes us purr - Episode 21 Teaser - The Knitmore Girls 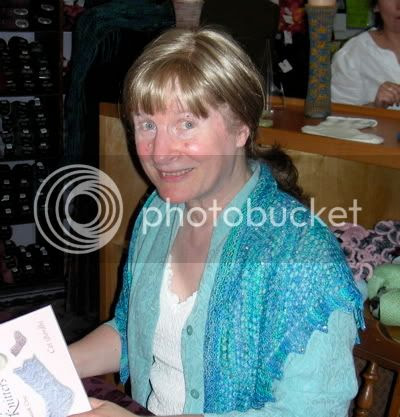 Email ThisBlogThis!Share to TwitterShare to FacebookShare to Pinterest
Labels: Teaser 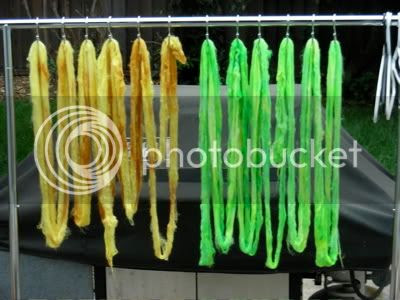 Gigi and Jasmin went to the Rosicrucian Museum and admired ancient textiles. [Our friend there was Karenzknitknacks, not Karenbynight.]

Jasmin finished her Baby Surprise Jacket, and her Sirius socks. She is casting on a new pair of handspun socks out of Pigeonroof Studios "Mushroom Caps."

Gigi is knitting a "vanilla sock" out of Lana grossa Meilenweit in color 5565 (it looks like Trekking), with a Strong Heel from the The Little Box of Socks

Jasmin is working on a sweater for the Purlescence gals (one of their original designs) out of the Manos Silk and Wool.

Gigi is knitting the Knitting Pure and Simple Wrap Cardigan in Cascade Venezia.

Jasmin had technology go terribly awry when trying to load the video of the sheep shearing onto the computer. As promised:


Gigi had killer dust bunnies (with BIG TEETH!) in her sewing machine.

When you're done sewing, take the little brush, and tidy up your machine. A keyboard vaccuum and compressed air also work nicely for sewing machine maintenence/clean-up. Ursula bought Gigi this Magnetic light

for her sewing machine!

Jasmin loves continued education, and she and Gigi will be taking a class from Cat Bordhi in Lafayette, CA on Saturday, September 27th at Yarn Boutique.

The Stitches West class catalog is up!

Back from Boonville - Episode 19 - The Knitmore Girls 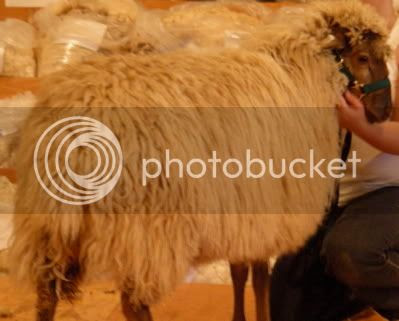 Show notes to be posted.

Finishing up a storm! - Episode 18 - The Knitmore Girls 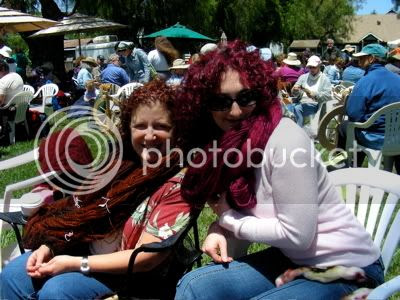 (No-Blog-Rachel and Jasmin with matching mohair)

Gigi has finished her Olympic Sweater and her Waves and Piers socks (from the Little Box of Socks). She has run out of UFOs!

Jasmin has finished her Hedera Socks (made of copper-colored Koigu) and her fuschia ribbon shell (made of the Tess Designer Yarns Microfiber Ribbon).

[Tess Yarns is also a mother-daughter operation!] Follow the direction on the label as to how to wind the ribbon, and use Fray-Chek to secure your end. You'll thank us later.

Jasmin suggests watching an episode of something (like Deadwood [Mature Content], Big Bang Theory, or Shark Attack in the Mediterranean) while you carefully wind the ribbon.

Jasmin has spun some day-glo colored sock yarn out of CrazyMonkey roving. It's FABULOUS and retina-searing.

Hunting for inspiration, Jasmin tripped across the Henley Perfected in Ravelry. I "favorite"d this one.

Gigi mentioned permission slips for changing patterns in Episode 17. The card is a business card on the front and reads "This grants official permission to change patterns at will." We're giving these out in person, but if you'd like one and are not a local listener, we will be happy to mail them out for a $1 donation. This covers the stamp and envelope, and gives us a little pocket change for operational costs and show-related travel. (Click the Paypal button in the sidebar and donate if you're interested in participating.)

Fleeces! Listener Mollie pointed out that Jasmin had neglected to describe the fleeces from the wool auction. Jasmin whittled it down to the six fleeces she has snippets of. It turns out, they're all different shades of grey. Shari from Morro Fleece Works is in posession of all dirty fleeces. (We love her.)

Gigi's collar on her Olympic Sweater was... off. She "auf'd" it, and reknitted it. Twice. It's better now.

Jasmin's knitting is not agreeing with her. Jasmin bought the mohair pictured above (with No-Blog-Rachel) for the Cardigan to Love. After a long day, late at night, Jasmin messed up the sweater on row 5 of the lace pattern. In mohair. That now needs ripping. Jasmin went stash diving and cast on the Henley Perfected.

Jasmin and Gigi will be attending the California Wool & Fiber Festival! We will be there Friday, September 12th and Saturday, September 13th. Come and say hi! )
Posted by Jasmin at 11:10 AM 4 comments: