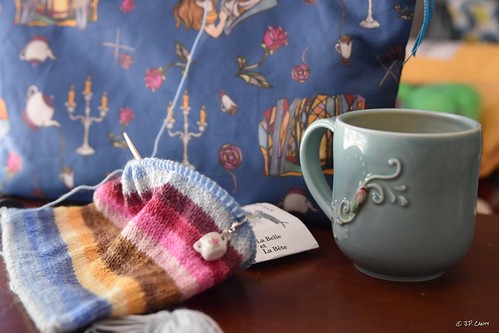 Those of you familiar with Akerworks™ products may already know Akerworks™ bobbins were designed by an engineer and an architect to make spinning enjoyable and relaxing. You also may know that you can choose among twenty colors and six styles for the 3D-printed whorls—or that the bobbins break down for easy travel and storage. But… did you know that Akerworks™ bobbins hold more fiber, for most styles, than the related manufacturer’s bobbin? Akerworks™: We like making things.

No matter what you need, the barmaids have you covered from head to toe. Face pudding to keep you smiling, Lolo lips keep them kissable, probiotic deodorant for keeping you fresh as a rose, oh for feet’s sake to keep your feet soft and sandal ready, and the Lolo body bar for everything in between. You can find all this - and more! at bar-maids.com

Every hobby needs organization, every project needs a place. Erin.Lane bags helps you turn your fiber pasttime into neat and organized endeavor. Our project bags, totes, and needle and notions organizers are everything you need to keep your fiber arts from fraying.

Named for the Three Fates and the Three Graces in Greek Mythology, Infinite Twist Fates and Graces are three-packs of cake-dyed gradient yarns. They are sisters (from the same dye lot), but not triplets. Each cake is 200 yards long, and knits up into five unique stripes. Variegated, speckled, or semi-solid, each stripe brings something new to your needles.To showcase these gorgeous gradients, Infinite Twist has worked up an easy Bias Scarf Kit featuring Fates and Graces. If you can k2tog and m1, you can knit this scarf!Perfect for purse- or travel-knitting, and available in the Infinite Twist shop.


On the Needles:(0:31)
Jasmin has finished the edging and blocked the Sideways Dude cardigan out of Dragonfly Fibres Traveller in “Horton Hears a Who”.
Gigi has bound off the Three Color Cowl by Joji Locatelli out of yarn from the Neighborhood Fiber Company, using Jenny's Amazingly Stretchy Bind-off. Needs to be blocked and photographed.


Jasmin is working on the raglan decreases on the Lionheart sweater for Rex out of Abstract Fiber Calder in “diversity” and “saffron”.

Gigi is working on the body of the Sidewalk sweater. . And it is heavy, and getting close to the hem

Jasmin has gotten the sleeves half-knit out on the Hearthstone pullover by Ysolda Teague in Twisted Owl “Eye Searing Pink”.

Gigi is working on another Bias Cowl out of yarn by the Neighborhood Fiber Company. Perfect for watching tv.

Jasmin has swatches for the Te Fiti sweater for Genevieve out of Knitmona DK. We talk about beading on the sweater.

Jasmin is working on the La Belle et la Bete cowl from Little Skein in the Big Wool.While she drinks the custom rose and jasmine tea from Plum Deluxe


Jasmin is casting on her Flirty Berberis as we record.

Gigi finished knitting the preemie beanie, and cast on another one.

In Stitches:(27:33)
Gigi has been wearing her Quynn hat and the Greyhaven hat which was a gift from Boston Jen.
Rex has also been wearing his Quynn hat, which Laura from the Knit Girllls hat made for Genevieve. Very generously, Genevieve let Jasmin borrow her Hamilton hat.

We mention Emily, who designed the Hamilton hat. Jasmin is also thrilled about the Goodreader app

Gigi has pulled all her woolens out of her closet, to wash before storing them. She has set up an assembly line system.

Conquering Mt. Knitmore. Gigi has a routine going. Ideally, very day, wash one piece in Soak, spin in washing machine, lay flat to dry. Afterwards, they need to be Gleenered.  She has 11 Sweaters done, 7 More to go. She also wants to block her stash of finished shawls.

Events:(36:04)
Stash Dash starts May 26. This is hosted by the Knit Girllls
Spinning at the Retzlaff Winery: Saturday, June 3rd. Dr Gemma will join us.
Tour De Fleece :7/1 through 7/23/2017. Training will start next episode
Monterey Wool Auction: Still TBD

Mother Knows Best:(38:27)
This week we answer a question from the “what do you want to hear about?”  thread about weaving in ends.

When Knitting Attacks:(44:40)
Gigi was test knitting a heel, she got the leg done. Someone didn't measure her foot
Jasmin dropped a stitch on a sleeve.

And Sew On:(55:44)
Gigi is planning to sew preemie shirts. She downloaded patterns ( patterns range from 1lb to about 7.5 lbs. seven different sizes), printed them out and wants to make plastic templates.
Need to get quilting template sheets to make sturdy patterns.